The JACL Creed was adopted from “The Japanese American Creed” by Mike M. Masaoka, as read in the United States Senate Chamber by Senator Elbert D. Thomas of Utah and printed in the Congressional Record on May 9, 1941. 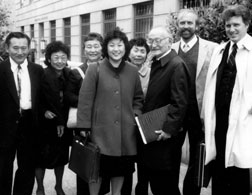 I am proud that I am an American citizen of Japanese ancestry, for my very background makes me appreciate more fully the wonderful advantage of this nation.

I believe in her institutions, ideals, and traditions; I glory in her heritage; I boast of her history; I trust in her future.

She has granted me liberties and opportunities such as no individual enjoys in this world today.

She has given me an education befitting kings. She has entrusted me with the responsibilities of the franchise.

She has permitted me to build a home, to earn a livelihood, to worship, think, speak, and act as I please – as a free man equal to every other man.

Although some individuals may discriminate against me, I shall never become bitter or lose faith, for I know that such persons are not representative of the majority of the American people.

True; I shall do all in my power to discourage such practices; but I shall do it in the American way, above board, in the open, through courts of law, by education, by proving myself to be worthy of equal treatment and consideration.

I am firm in my belief that American sportsmanship and attitude of fair play will judge citizenship on the basis of action and achievement and not on the basis of physical characteristics.

Because I believe in America, and I trust she believes in me, and because I have received innumerable benefits from her, I pledge myself to do honor to her at all times and in all places, to support her Constitution, to obey her laws, to respect her Flag, to defend her against all enemies foreign or domestic and to actively assume my duties and obligations as a citizen, cheerfully and without any reservation whatsoever, in the hope that I may become a better American in a greater America.