Skip to the content
Challenging the Asian American Disloyalty Myth 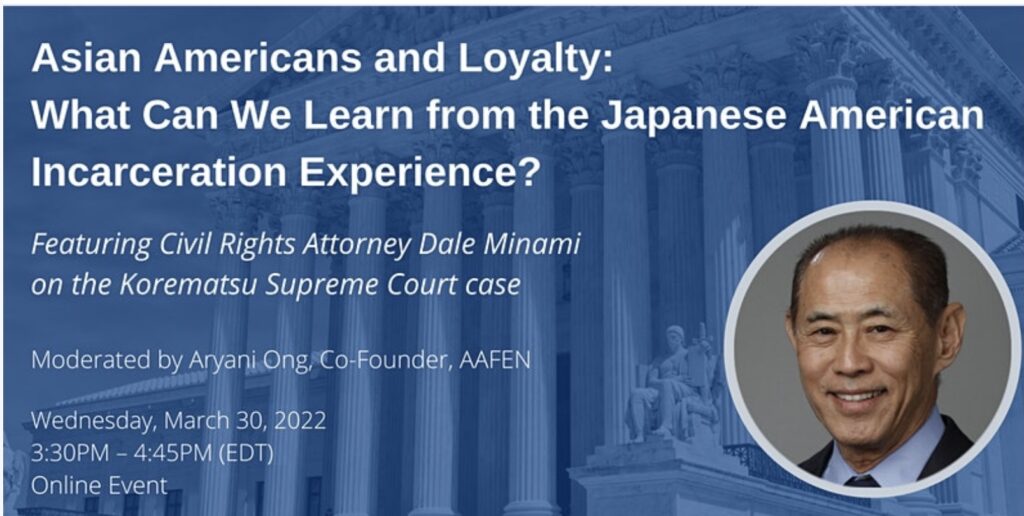 With support by Civic Leadership USA (CLUSA)
Speaker: Dale Minami, Litigator, Korematsu v U.S.
Opening remarks: Rebecca Lee, Deputy Director, White House Initiative on Asian Americans, Native Hawaiians and Pacific Islanders, (WHIAANPI)
Moderator: Aryani Ong, Co-Founder, Asian American Federal Employees for Nondiscrimination (AAFEN)
About the Talk
In 2022, 40 years after 1942, 1 in 5 Americans believe that Asian Americans are more loyal to their country of origin than the U.S. What did we learn from the past that we can apply to the present? Civil rights icon Dale Minami speaks on the landmark Supreme Court case that overturned a Japanese American incarceration era conviction and answers questions on the Asian American movement toward racial equity, inclusion and belonging.
Dale Minami was the Lead Attorney for a team that represented Fred Korematsu in the District Court case in 1984 which vacated Korematsu’s conviction, upheld by the United States Supreme Court in a landmark ruling in 1944. Korematsu had defied the WWII order to report to an incarceration camp. The Korematsu case, together with other cases, advanced the Japanese American reparations movement. Over 120,000 Japanese Americans – 2/3 of whom were U.S. citizens - were incarcerated in prisons. Later, Minami, representing the adult children of Korematsu, with the same team also filed an amicus brief in the U.S. Supreme Court review of the government’s travel ban, which resulted in the High Court’s repudiation of the 1944 Korematsu decision via its review of Trump v. Hawaii. Source: American Bar Association.
More information
Virtual