“ ALTERNATIVE FACTS: The Lies of Executive Order 9066” is an award-winning documentary which examines the fabricated evidence of espionage by Japanese Americans. This led to their forced removal and incarceration during World War II. Interviews illuminate the racism, xenophobia and backhanded political maneuvering that occurred.

The film also examines the parallels to the current climate of fear, the targeting of other vulnerable immigrant and religious communities, and the role media has played in vilifying people of color.

Today’s addition of Eritrea, Kyrgyzstan, Myanmar, Nigeria, Sudan and Tanzania expands he number of countries affected by the Muslim Ban to 13. Similar to the first ban, the people impacted are predominantly Muslim. But these new additions will also affect those fleeing persecution in places such as Myanmar. That these announcements have come in the same week as the three year anniversary of the issuance of the first Muslim Ban and Holocaust Memorial Day is reprehensible. We cannot recall the holocaust without acknowledging our country’s role in refusing holocaust refugees entry. As we now repeat the same mistake through this expanding and misguided policy, it would behoove us to question its validity and effectiveness. Since the implementation of the first Muslim Ban, families have been forced to live apart, college student’s studies have halted, and lives have even been lost because of the restrictions. What has this ban truly done to protect our country?

The ban is a source of particular pain to the Japanese American community. The Supreme Court upheld the ban in its 2018 decision on the basis of national security. This was the exact same rationale used to uphold the World War II incarceration of nearly 120,000 people, many of whom were citizens, because of our national ancestry. The fact that Chief Justice Roberts went out of his way to repudiate the Korematsu decision was ironic in the decision’s reaffirmation of discrimination on the basis of national origin under the guise of national security. In neither case has the government been able to prove an actual security threat.

The expansion of the Muslim Ban continues a pattern of discrimination by this country against communities of color as also seen in the policies of family separation and incarceration, changes to the public charge definition, and most recently, subjecting American citizens of Iranian ancestry to additional screening at the Canadian border. Having experienced the sting of restrictions on Asian immigration in the past, JACL opposes these broad attacks on immigration which stand in direct opposition to the ideals upon which this country was founded that we have yet to truly uphold.

The Japanese American Citizens League is a national organization whose ongoing mission is to secure and maintain the civil rights of Japanese Americans and all others who are victimized by injustice and bigotry. The leaders and members of the JACL also work to promote cultural, educational and social values and preserve the heritage and legacy of the Japanese American community.

JACL Concerned by Reports of Increased Screening Procedures for Iranian American Citizens at the U.S./Canadian Border

Washington, DC – This past weekend, reports of increased screening of Iranian Americans returning to the United States from Canada arose late Saturday night and early Sunday morning. Although individuals were not officially detained or taken into custody according to Customs and Border Protection (CBP), it is clear that many U.S. citizens of Iranian descent were subjected to additional screening that non-Iranian citizens were not.

JACL denounces this expansion of screening and further questioning based solely on Iranian heritage. Our country should have learned its lesson when it targeted Japanese Americans because of our ancestry. We must not repeat the mistake of casting suspicion on American citizens simply because of their family’s country of origin. Racist discrimination should not be institutionalized under the guise of national security interests.

CBP seems to be seeking cover by claiming to have not detained or ordered for the detention of any individual, but has made no comment in regards to the extended questioning and screening procedures. We call upon CBP to immediately halt any discriminatory policies singling out travelers solely for their Iranian heritage. If CBP did not issue orders for additional screening, it must conduct an immediate investigation as to why additional screenings were required for Iranian Americans crossing the border.

The Japanese American Citizens League is a national organization whose ongoing mission is to secure and maintain the civil rights of Japanese Americans and all others who are victimized by injustice and bigotry. The leaders and members of the JACL also work to promote cultural, educational and social values and preserve the heritage and legacy of the Japanese American community.

We hope that you will plan to join us on Tuesday, August 6th, 6:00 – 7:00 PM at the Japanese American Historical Plaza (NW Naito Parkway and Couch Street on the Portland waterfront) for the annual Portland-area Hiroshima and Nagasaki memorial event. This year’s event, The Unequal Impacts of Nuclear Weapons, will explore the disproportionate impacts that nuclear weapons have on women, children, indigenous communities, and communities of color.

Michiko Kornhauser, a hibakusha (atomic bomb survivor), will discuss her first-hand experiences as a young girl living near Hiroshima during and subsequent to the August 6th, 1945 bombing. Patricia Hoover, a Hanford Downwinder, will speak on the lasting health impacts of radioactive contamination that resulted from decades of nuclear weapons production at the Hanford Nuclear Reservation on the Columbia River near Richland, Washington. Our event emcee will be Kurt Ikeda, Education Manager at the Oregon Nikkei Endowment. Andrea Cano, Clinical and Palliative Care Chaplain with Providence Health & Services, will provide our opening event invocation. We will also be joined by Native American poet and storyteller Ed Edmo, who will offer an opening land acknowledgement statement. Special thanks to Andrew Tolman, who will be providing American Sign Language interpretation for this event.

The event will also build upon our recent success putting Oregon on record in support of the UN Nuclear Weapons Ban Treaty and urging Congress to lead a global effort to reduce the threat of nuclear war. Introduced at the request of Oregon PSR, Senate Joint Memorial 5 calls out the injustice and harm that nuclear weapons have caused through the bombings of Hiroshima and Nagasaki, uranium mining on indigenous lands, weapons testing in the Pacific Islands, and contamination of our own region from the Hanford Nuclear Reservation. The passage of this historic legislation, which was supported by 31 organizations around the state, makes Oregon the second state in the nation to join this growing movement of local governments to support the Ban Treaty.

This event is free and open to the public, and donations are gratefully accepted. Please mark your calendars and plan to join us on Tuesday, August 6th in remembering the victims of the atomic bombings of Hiroshima and Nagasaki, learning more about the unequal impacts of nuclear weapons, and taking action for a nuclear-free future.

We look forward to seeing you on August 6th!

Download the event flyer and help us spread the word! 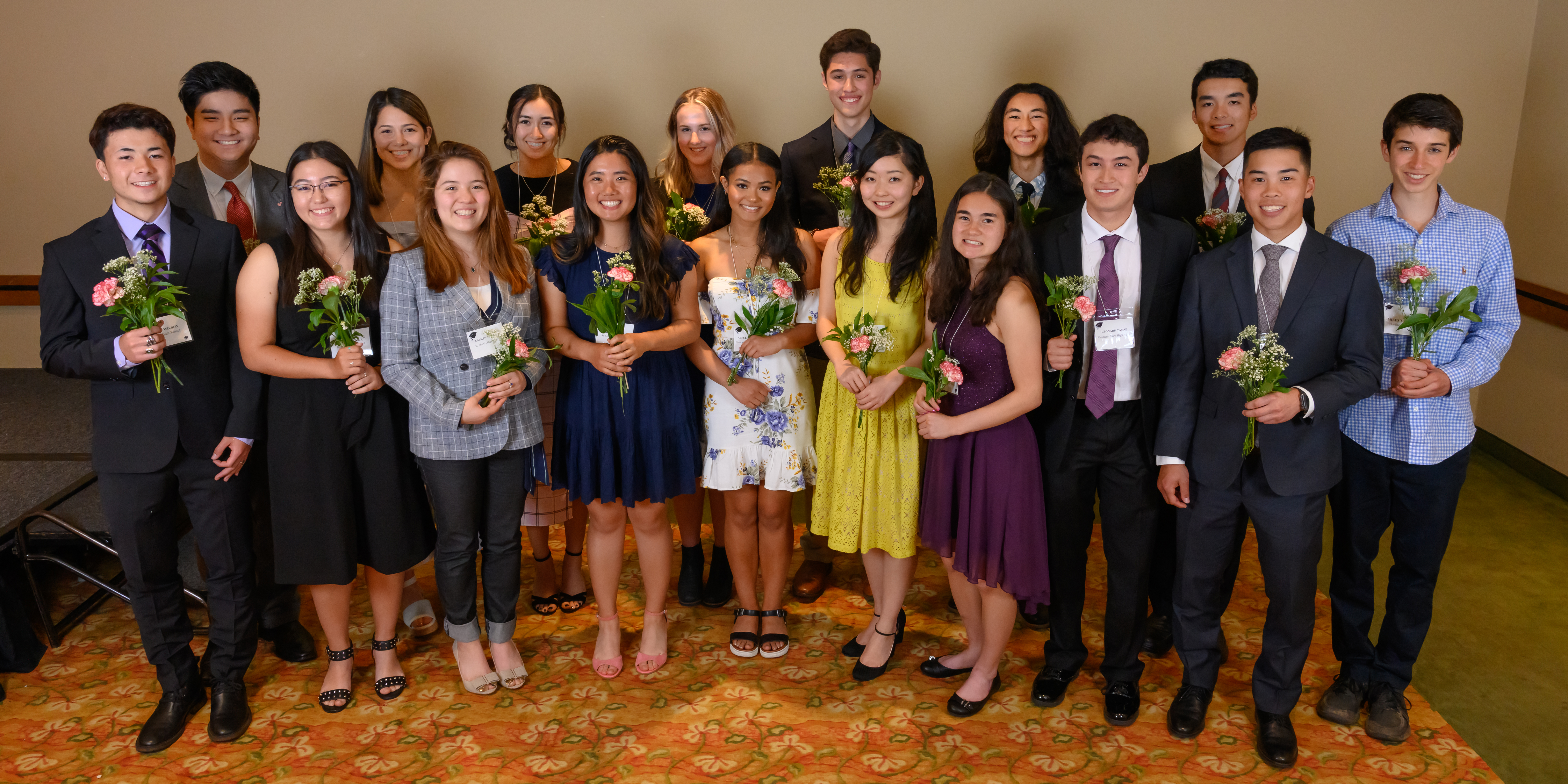 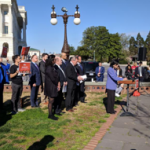 Good morning, my name is David Inoue, and I am the executive director for the Japanese American Citizens League. We are the oldest and largest Asian American civil rights organization in this country.

It is with heavy heart that I come here today to stand with our friends in the Muslim community. What happened in New Zealand is unfortunately becoming too common an occurrence. It is unthinkable that nearly 100 people have been killed or injured in coordinated attacks on two different mosques, sacred places of worship.

We can make no mistake, the evil behind these attacks is too often rooted in white supremacy, exposed by the targeting of places of worship whether most recently a Muslim mosque in New Zealand, or Jewish Synagogue in Pittsburgh, or an African American church in Charleston, South Carolina, or a Sikh Gurdwara in Oak Creek, Wisconsin. For these killers, nothing is held sacred, and these targets are selected because of the religion they practice. This is not new, hatred and discrimination have a long history. But is shows we are not learning from our history.

With all the talk of immigrants invading our country, threatening our way of life, and the need to build a wall. It is the opposite. We now have a segment of our country that is eroding the ideals of what it means to be American from the inside. We are increasingly not a nation that stands for religious freedom, and diversity as memorialized in our first amendment. And it now appears, we are exporting that hatred and evil to other countries.

Today is Friday, it is the day of community worship in the Muslim community, and in fact, that time of prayer will be quickly approaching at the noon hour. We hope that Muslims around the world today can find strength in their community as they worship together and know that they are surrounded by a community of other faiths and beliefs that stands with them. Together, we will all continue to work together to eradicate Islamophobia and other forms of hatred that weaken us as a nation, and as a worldwide community.

The Japanese American Citizens League is a national organization whose ongoing mission is to secure and maintain the civil rights of Japanese Americans and all others who are victimized by injustice and bigotry. The leaders and members of the JACL also work to promote cultural, educational and

social values and preserve the heritage and legacy of the Japanese American community.